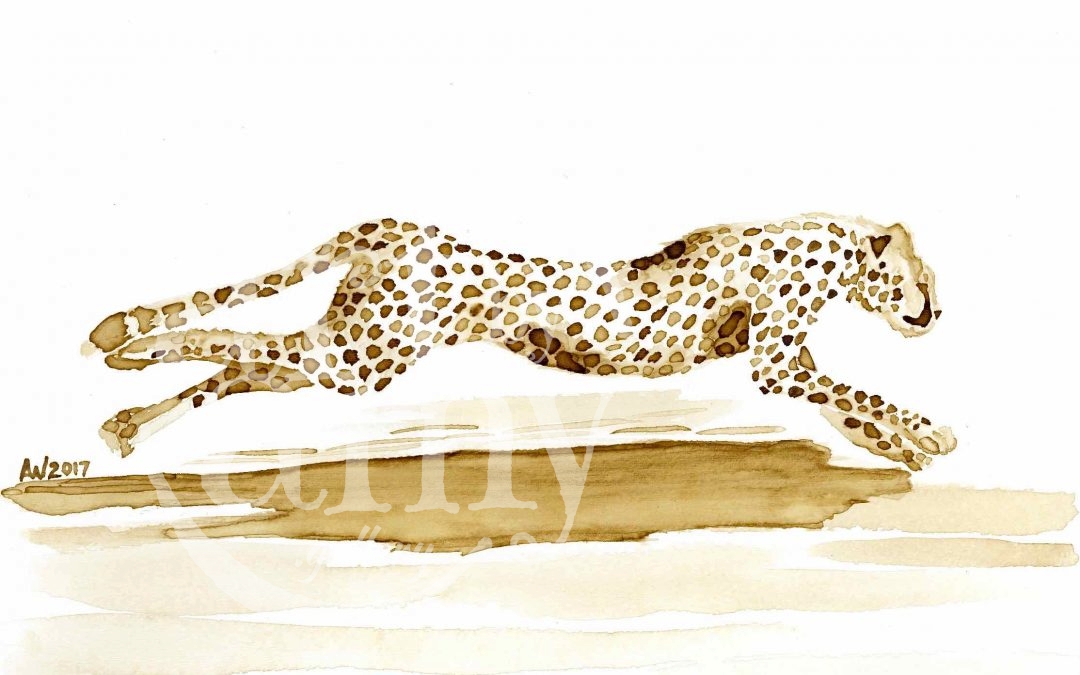 In October, I was contacted by the Cheetah Conservation Fund (https://cheetah.org/about-the-cheetah/ ) to create a piece of CoffeeART depicting the cheetah on their logo. I donated the original artwork to the organization for fundraising and created custom notecards for them as well. As with all art projects I work on in the studio, I like to learn about the subject before I begin. A bit of research if you will.

The cheetah is the world’s fastest land animal and Africa’s most endangered big cat. Uniquely adapted for speed, the cheetah is capable of reaching speeds greater than 110 kilometers per hour in just over 3 seconds, and at top speed their stride is 7 meters long. With its long legs and very slender body, the cheetah is quite different from all other cats and is the only member of its genus, Acinonyx. The cheetah’s unique morphology and physiology allow it to attain the extreme speeds for which it’s famous, and is often referred to as the greyhound of cats.

Cheetahs once ranged across the entire African continent, except for the Congo Basin, and into Asia from the Arabian Peninsula to eastern India. Today, cheetahs are found in only 23% of their historic African range and are extinct in their Asian range except for a small population in Iran of about 50 individuals.

After studying this beautiful creature, it was time to paint. As I brewed a fresh pot of coffee, I began sketching out this sleek cat. The unique dark spots were carefully applied and then I added some streaks of coffee beneath the cheetah, to try and capture and convey the speed at which they travel. I am extremely grateful for the opportunity I had to create this unique piece, and look forward to working with the Cheetah Conservation Fund on more projects in the race to SAVE this beautiful creature form extinction.